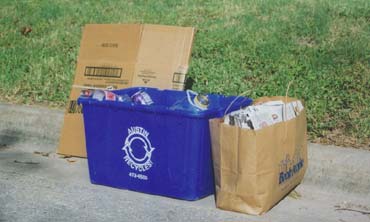 During the 1990s, curbside recycling in the United States mushroomed from about 2,000 programs serving only 15% of the population to 10,000 programs serving about half of the American population. Whether blue boxes, bags, or buckets are used, curbside recycling is convenient for the consumer, and has been instrumental in recovering large quantities of food containers, newspapers and junk mail, and beverage containers consumed at home.

Unfortunately, the recycling excitement of the 1990s has waned in recent years. The growth of new recycling programs plateaued around 2002, so large chunks of the U.S. population living in dense urban areas, sparsely settled rural areas, or apartment buildings, do not have curbside recycling at all. Within many existing curbside recycling programs, people’s participation has also tapered off, and local government does not have the money to beef up program promotion and enforcement.

Clearly, curbside recycling across the country needs a shot in the arm, or it risks becoming a financial liability for hundreds, if not thousands, of cities and towns.