Arlington, VA-- Data released late Friday by the Aluminum Association, an industry trade group, reveal that the twelve -year trend of declining aluminum can recycling shows no significant signs of reversing. The industry group reported a can recycling rate of 51.2% in 2004, up from a reported 50.0% in 2003. The latest reported recycling rate is 17 percentage points below the peak rate of 68% reported by the Aluminum Association in 1992.

In accordance with methods used by the U.S. Environmental Protection Agency[1], the non-profit environmental group Container Recycling Institute (CRI) has calculated that the recycling rate was actually 45.1% in 2004, up less than a full percentage point from 44.3% in 2003. On a per capita basis, CRI said that 3 cans more were recycled per American in 2004 than in 2003. Total consumption (sales) was 341 cans per capita in both years.

CRI research director Jenny Gitlitz noted that 55 billion aluminum cans were wasted (not recycled) in 2004, 9 billion more than were wasted in 2000--810,000 tons of metal that is either buried in a landfill; burned in an garbage incinerator; or littered along the nation's roads, parks and beaches. �To visualize 55 billion wasted cans,� Gitlitz said, �imagine the Empire State Building filled with cans twenty times. It is a quantity equivalent to the annual production of 3-4 major primary aluminum smelters.�

CRI charges that efforts by the aluminum industry and the beverage industry to promote can recycling on the national scene have failed to achieve significant results.

�Three years ago, the industry formed the �Aluminum Can Council' to address falling recycling rates,� Gitlitz said , �and despite the group's activities--including a Mayor's �Cans for Cash' Challenge, a program to recycle cans through Habitat for Humanity, and a kid-friendly website featuring Jimmy Neutron�the tide of aluminum can waste has not been stemmed. These public relation campaigns, and other efforts over the past decade, have had a negligible impact on recycling.�

�The industry insists that curbside recycling and better public relations can get their message across and spur citizens to recycle more,� said Pat Franklin, CRI executive director, �but they remain obstinate about acknowledging the only program proven to recycle 70-90% of the cans sold in any given market: the deposit system.�

�Despite a tripling in U.S. curbside access during the 1990's,� Franklin said, �aluminum can recycling rates have been trending down, due primarily to away-from-home consumption,� she said. �People drinking sodas in the car or at work just aren't going to bring their empties home to their blue bins. It's the financial incentive of a 5- or 10¢ deposit that makes all the difference.� 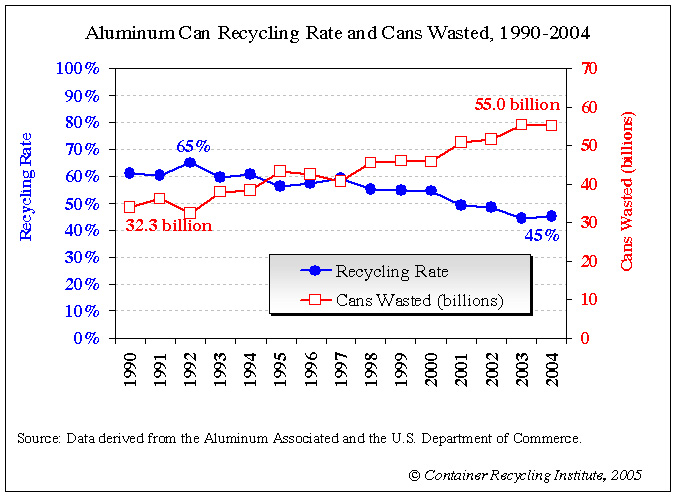 The number of new curbside programs being developed in American cities has also plateaued due to the high taxpayer costs of running them. Indianapolis is the most recent large U.S. city to consider canceling its curbside program due to low citizen participation and high operating cost.

In addition to the aesthetic and public health impacts of litter, each can that is landfilled or burned instead of recycled must be replaced with an equivalent can made from 100% virgin materials.

�The direct and indirect environmental impacts of replacing 810,000 tons of wasted aluminum cans include about 3.5 million tons of unnecessary greenhouse gas emissions; tens of thousands of tons of SOx and NOx emissions; strip mining over 3 million tons of bauxite; and a host of other industrial activities and pollutants in environmentally-sensitive habitats worldwide,� Gitlitz said.

Franklin said that there are also many lost business opportunities from the failure to recycle these 55 billion cans. �At today's prices, the cans trashed in 2004 could have fetched about $940 million. It's money down the drain, energy down the drain, and resources down the drain. We call on the aluminum and beverage industries to implement dramatic efforts to increase recycling to 75% or above�rates that are common in deposit states�and a goal the industry set for itself in 1993.�

1- CRI and the US EPA deduct imported scrap cans from the total recycled, since they are not sold in the U.S.., and should not count in the domestic recycling rate. Export and import data are available from the U.S. Department of Commerce.

About the Container Recycling Institute (CRI): CRI is a 501(c)3 non-profit national organization that studies beverage container sales and recycling trends, and promotes policies to reverse wasting. CRI provides technical information and analysis to students, activists, policymakers, and the media. The organization is supported primarily by foundations, with support from businesses, organizations and individuals.
Scroll To Top