Exploring refillables in the United States

Long before one-way beverage bottles and cans came to dominate drink packaging in the mid-20th century, (1) refillables were how Americans—and people around the world—consumed beer, soft drinks, and milk. While refillables have largely disappeared as a mass market commodity in the United States, they are making a resurgence in some regional markets. These markets and uses are worth exploring as alternatives to today’s unsustainable system of disposable containers that saddles the environment, and local taxpayers across the country, with 185 billion wasted bottles, cans, and cartons each year. That is 14 million tons of wasted metal, glass, plastic, and paper—and untold millions of pieces of litter along our nation’s roads, beaches, parks, farms, and public spaces. (2)

Pursuing a refillable bottle infrastructure in the United States would be a valuable endeavor. Refillables have a much lower carbon footprint than one-way glass or plastic bottles (consuming about 93% less energy than comparably sized one-way glass), and they use less water overall. (3)

To determine how regional refillables systems might be expanded or replicated, it is worthwhile to explore existing refillables programs in the United States and Canada:

Oregon: the BottleDrop refillables program is operated by the Oregon Beverage Recycling Cooperative (OBRC), a privately-owned extended producer responsibility (EPR) organization that also operates the statewide redemption system for one- way beverage containers. As of early 2021, only beer, hard cider, and wine bottlers have taken advantage of the refillables system, although it is open to all beverage producers.(4)..

The only refillables program in the United States to cover an entire state, it provides bottlers with specially designed, Oregon-specific bottles.(5) These bottles are thicker and stronger than single-use glass bottles and are embossed with “BottleDrop” and “Please Return.”

As of early 2021, eleven craft breweries and wineries are participating. OBRC’s bottle “sharing” system makes it easy for small brewers and vintners to join the system because the standardized bottles are already available to them. Because they essentially “rent” these standardized bottles, they can forgo the expense of designing a customized bottle, paying a manufacturer to make molds for it, and paying for the production of all their bottles, including the excess quantities necessary for peak seasons and delayed returns (“the float”). Since this financial barrier to entry has been eliminated, OBRC reports that “around 100” different beverage types were available in refillables in Oregon as of Feb. 2021. They also reported that their refillable BottleDrop locations saved 407,840 bottles from being crushed and recycled in 2019.(6) OBRC attributes their ability to be creative and successful in this endeavor to the existing redemption infrastructure, and to Oregon’s “strong comparative redemption rate” resulting from the strength of Oregon’s bottle bill, and from the Oregon beverage industry’s efficiency and cooperation. Also noteworthy is the deposit value increase from 5¢ to 10¢ in 2017.

California: the company Conscious Container has completed a series of refillables pilot programs in northern California. They recently received a $500,000 grant from CalRecycle’s Beverage Container Program to “develop and deliver a new reusable/refillable glass bottle infrastructure in Northern California” for Phase 3 of their Pilot Reuse Wine Bottle program in Napa and Sonoma.(7) They aim to refill beer, wine, and non-alcoholic beverages in other regions of the state and country as well.

Montana: Bayern Brewing in Missoula, Montana (at right) is a craft brewery whose “Eco League” refillable program reused 36,000 six-packs in 2017.(8)

Pennsylvania: The Straub Brewery in St. Mary’s (north central PA) has been a family-owned brewery for almost 150 years.(9) They have been bottling in refillables since 1946, and report that their returnable flagship beers—Lager, Light, and Amber—continue to be most requested by customers. In 2016, Straub received a Leadership in Reusable Packaging Award from the Pennsylvania Resources Council.10 Although Pennsylvania is not one of the 10 U.S. states with a container deposit law, Straub customers keep coming back for their favorite beers with a 5¢ refund value. 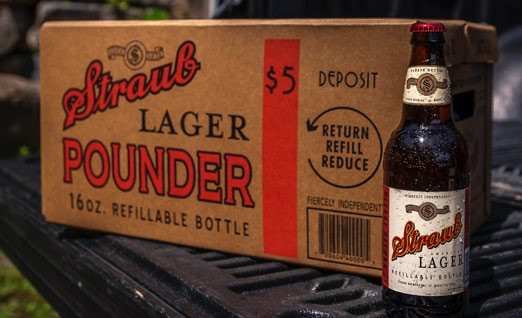 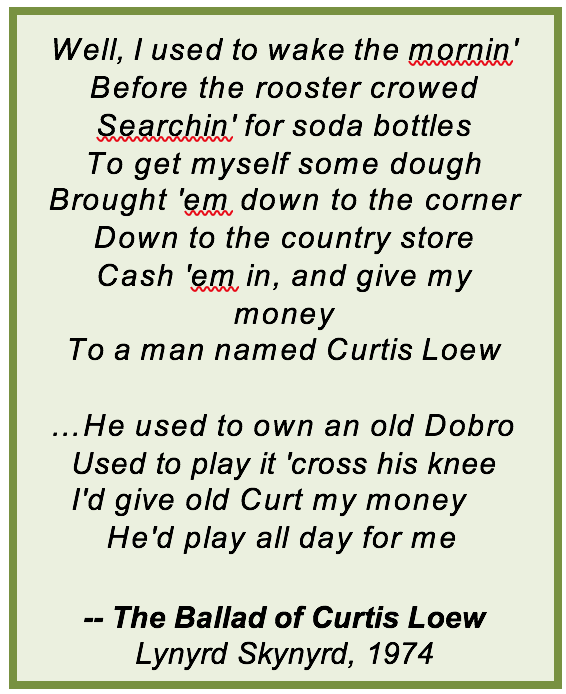 Canada: As far back as 2005, Canadian beer brewers were achieving a refillable bottle return rate averaging 97% through the use of the industry standard refillable beer bottle (ISB). (11) In 2016, a 95% return rate for refillables across the country was reported, with a trippage rate of 15 (the number of times the average refillable bottle is returned, cleaned, and refilled).(12) The Ontario- based Beer Store reported a 97% return on its half-billion refillable bottles sold in 2019.(13)

Soda pop in refillables: Once-ubiquitous soda bottle return options had largely disappeared by the 1970s, making them objects of nostalgia and song. At least three U.S bottlers are still selling their products in local markets and washing and refilling them for a loyal customer base,(14) although one has paused refilling operations during the Covid pandemic.(15) 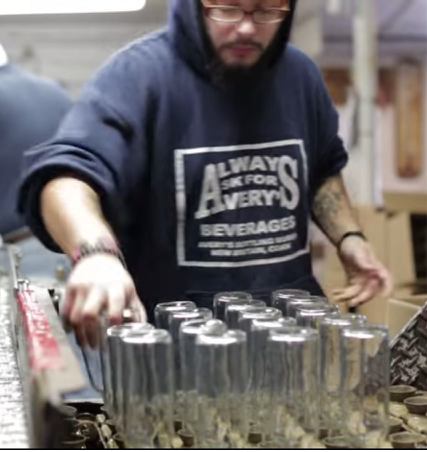 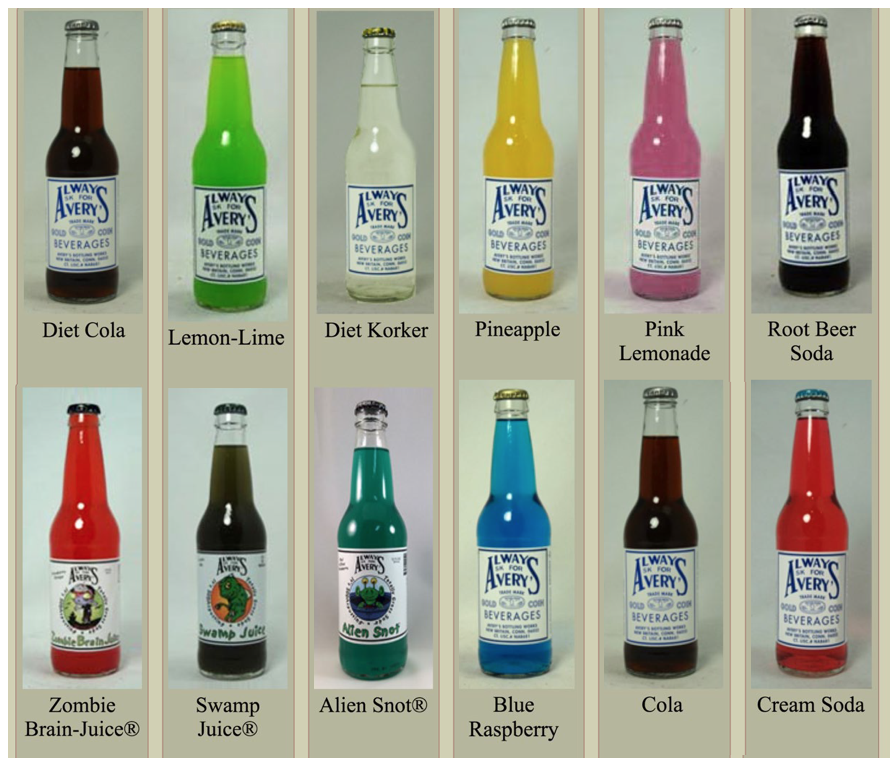 Milk in refillables: As of late 2020, 67 well-established, independent dairy farms and creameries were selling milk in refillable bottles in 29 U.S. states, including 3 each in Connecticut and Massachusetts, 2 in Vermont, 7 in Pennsylvania, and 6 each in California and New York.(16) Ten more operate in Canada. Almost all of these dairies have washing and refilling equipment on site. The average deposit value is $2.00 per bottle of any size, and the average bottle may be refilled 10-40 times, depending on where it is sold. Although milk in refillable glass bottles constitutes less than 2% of all U.S. milk packaging, it is a growing trend, with more small and medium dairies adding filling and washing lines each year, as part of the eat-local and farm-to-table movements.(17)

Since milk has not been included in any of the ten U.S. container deposit recycling programs, it would make sense for states’ environmental agencies to encourage dairies in their states to adopt refillables.

Refillables are still used throughout much of Asia, Latin America, and Africa--and to a lesser extent in the European Union (although Germany leads with a refillable beer and water market share of 35%). According to a recent report by Oceana, an NGO with a mission of protecting the world’s oceans, “Most of the top 10 global non-alcoholic beverage markets, including China, Mexico, Indonesia, India, Brazil, Germany, and Turkey have refillable market shares between 26% and 61%.”(18) The glass company O-I has 7 billion refillable bottles in circulation worldwide.(19) Each refillable bottle may make 30 trips (washing and refilling) before it breaks or is retired.

While this discussion has focused on glass refillables, refillable PET plastic bottles can be refilled 20 times, and are common in Europe. They should not be discounted as an idea to explore in the United States, especially since plastic bottle littering and marine pollution are such pernicious problems. A 2020 Oceana report on refillables found that “between 21 and 34 billion PET bottles…become marine pollution every year,” and discussed PET damage to marine life in painful detail. It called on coastal countries worldwide to adopt refillable containers.(20)

Since 30 of the 50 U.S. states are home to more than 12,000 miles of marine or lake shorelines in 5 coastal systems,(21) adopting refillables should be an imperative for the United States. Refillables could reduce plastic bottle litter along these coasts—and along our nation’s streets and roads, rivers and lakes, and parks and fields.

3Borchev, Boris. “The future of the glass bottles – refilling or recycling.” Public Participation in Developing a Common Framework for Assessment and Management of Sustainable Innovation” (CASI) website4/26/16, accessed 2/12/21.

8Bayern presentation at CRI webinar: “The Return of Refillables in the United States,” 12/13/18.

19“The return of the returnable beer bottle: Will customers bring ‘em back?” B. Batz, Pittsburgh Post-Gazette, 6/4/18.