For comprehensive analyses of California’s system, scroll down for reports, letters and other documentation

At a time when we must take every step possible to address our climate and plastic pollution crises, California’s beverage container deposit program (aka bottle bill) is suffering from extensive shortcomings – namely a staggering loss of redemption centers over the last decade and a lack of transparency about the amount of state funding available to help increase deposit return opportunities for consumers.

From 2013 to 2022, more than 1,300 (50%) of the state’s redemption centers closed – including nearly 300 in August 2019 by rePlanet, then the largest operator of such centers in California. This steep decline has created dire consequences:

•    dramatically less recovered income for consumers – on the order of $600 million annually – because they no longer can find sites for returning empty bottles and cans in exchange for the deposit refunds;

•    ensuing harm to the sustainable economy and the environment, because fewer recycled beverage containers means more end up in landfills, and more must be produced from virgin (versus recycled) materials.

The redemption center closures have stemmed primarily from an outdated state subsidy formula that results in severe underpayments to the centers to supplement the scrap values of recycled materials. Of the dozens of container deposit programs worldwide, only California’s employs a structure that imparts such high levels of financial risks, plus uncertain and inadequate payments, to redemption centers. Combined with several years of historically low scrap prices that reduced centers’ revenues, and minimum wage increases for employees, too many sites could no longer cover their operating costs and ensure enough profit to remain solvent.

With deposit return options plummeting, especially in “recycling deserts” that were left with virtually no redemption centers, the coffers of CalRecycle swelled. This state agency, which administers and provides oversight for recycling programs, keeps unclaimed deposit monies.

Diligent work by CRI helped bring to light that CalRecycle had been mis-reporting its Beverage Container Recycling Program (BCRP) fund balance in various reports, with an underreported differential of nearly $180 million for the 2019-20 FY – leaving legislators and consumers without the full picture about the program’s structural and operational failures.

For the 2020-21 FY, CalRecycle’s report to the State Controller’s Office – likely its most accurate data – indicated a main BCRP fund balance of $563.3 million. Although some increase in the balance from 2020 to 2022 can be attributed to a significant rise in packaged beverage sales and a decrease in container redemptions during the COVID-19 pandemic, the fund had been growing annually since 2015-16.

It will take a significant overhaul to revive California’s system. The state’s elected officials and regulatory bodies must, at a minimum, ensure predictable and sufficient funding for redemption centers and permanently raise the deposit on all containers from 5 cents to 10 cents to incentivize more returns. One positive step did occur in 2022 with the State Senate’s passage of a bill to add a deposit to wine and distilled spirits (liquor). (The State Assembly still must vote on it.) A CRI analysis indicates that, if implemented, this legislation would result in the recycling of more than half a billion additional bottles and cans annually.

After the revelation about the underreported BCRP fund balance, CalRecycle announced a proposal to use $330 million in surplus funds to increase deposit return options and provide “bonus” recycling credits. While it represents an important step for the agency to recognize the system’s deficiencies, this proposal – unanimously rejected by the State Senate Budget and Fiscal Review Committee – will not create long-term change until CalRecycle takes additional actions, including:

•    Preparing a clear statement of goals and objectives for the beverage container deposit program;

•    Establishing a measurement mechanism to assess results of its program enhancements, with publicly reported outcomes; and

•    Increasing enforcement of the “return-to-retail” commitment of retailers (including supermarkets) not currently adhering to their pledge to accept back empty containers and provide deposit refunds to consumers.

The documents on this page contain additional information on California’s beverage container deposit program, including CRI’s analyses of legislative developments and recommendations for ensuring that the nation’s most populous state operates an efficient, effective system key to a more circular economy.

Important note: For consumers whose nearest redemption center has closed, see the document titled “The California Crisis – Bottle Recycling in California: How to Get Your Deposits Back” (August 2019) for options on how to redeem your empty beverage containers for cash. 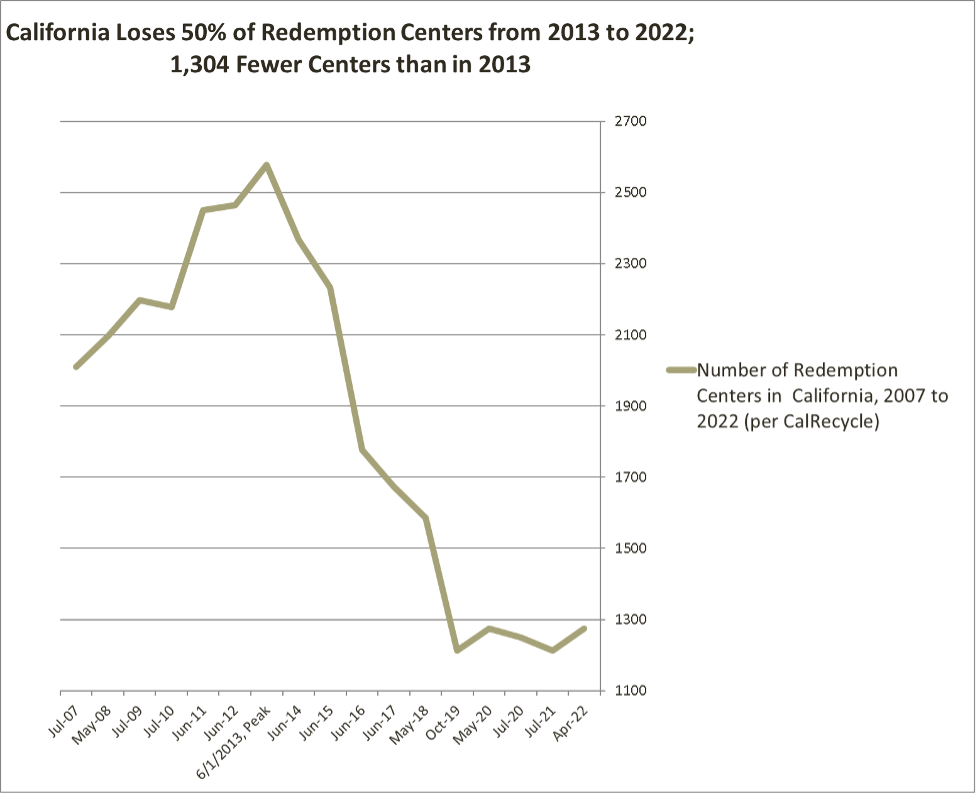 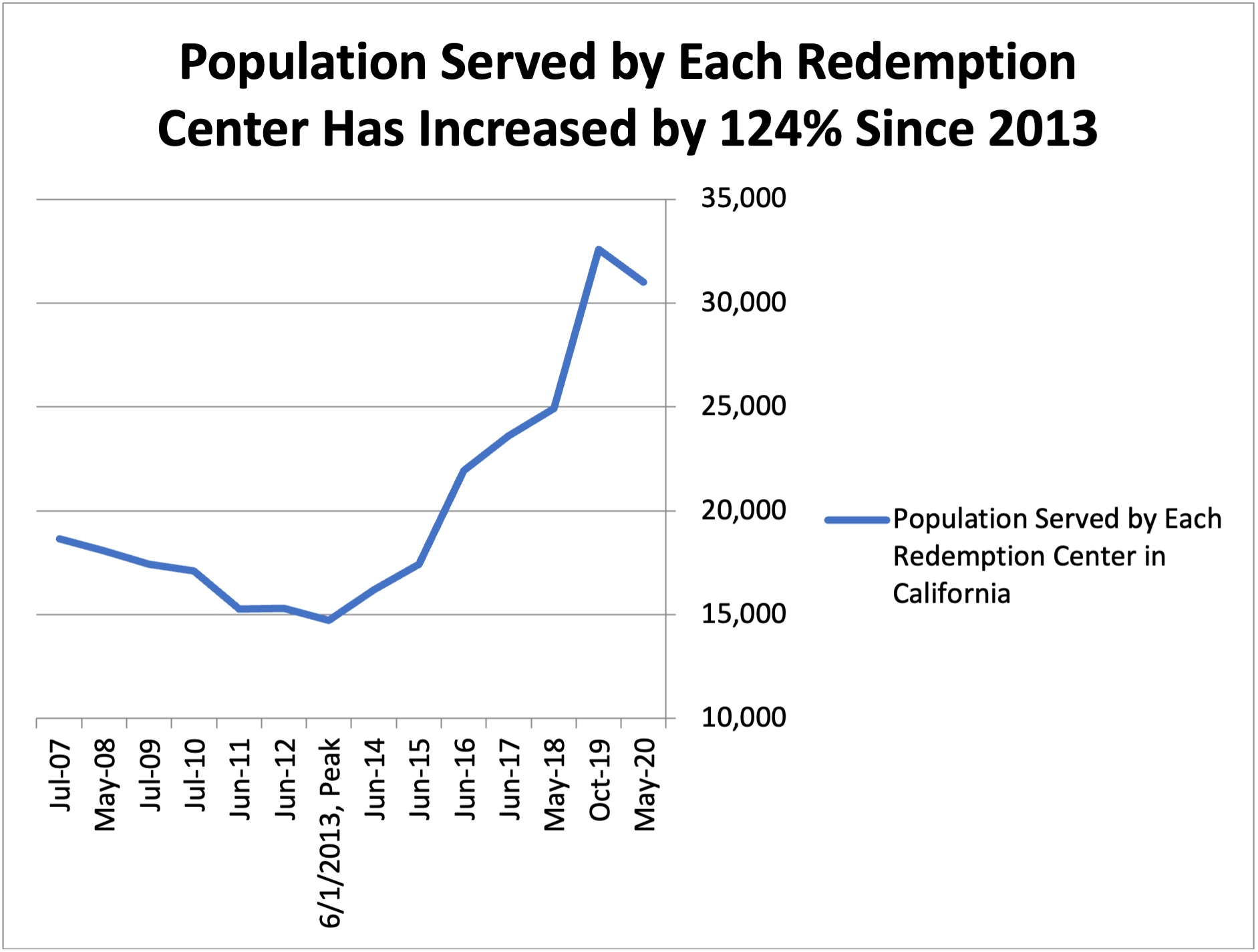 Letter from CRI to Assembly Committee on Appropriations to Support for SB 1013 (July 25, 2022) UPDATED

Proposed Bonus Credits Would Double Recycling Refunds to Get Surplus Bottle and Can Deposits Back to Californians (CalRecycle, April 1st, 2022)

The California Crisis – Bottle Recycling in California: How to Get Your Deposits Back (August 2019)

Summary of Findings: The operators of curbside and drop-off programs in California received $193 million in revenue from CalRecycle payments and scrap sales for CRV beverage containers in 2017. The estimated cost for handling those containers was $43 million, leading to a calculation of $150 million in gross profits, or a 349% profit. Download PDF [PDF, 449KB]

In December 2018, CRI submitted a letter to CalRecycle in favor of emergency regulations changing the RFR used to calculate 2019 processing payments (attached). We wrote that the proposed RFRs of 11% and 16% for rural sites were “nowhere near enough to avert the impending financial crisis for redemption centers.”
Download PDF [485KB]

We are writing in support of AB 792, which would require plastic beverage bottle manufacturers to make their bottles out of 100% recycled content by 2035, with intermediate goals to be reached incrementally.
Download PDF [485KB]

A “convenience zone” is defined as the area within a half-mile radius of a supermarket that has gross annual sales of at least $2 million. By statute, the intent is to have one redemption center in each convenience zone. This would ensure that it is just as easy to return an empty beverage container for refund as it is to purchase the beverage in the first place. Download PDF [PDF, 373KB]

CRI letter to CalRecycle in support of extending emergency regulations to boost payments to redemption centers, 12-10-18

The Container Recycling Institute supports the adoption of emergency regulations changing the reasonable financial return (RFR) applied to the calculation of processing payments for the period of January 1, 2019 to December 31, 2019.
Download PDF [PDF, 1MB]

The Container Recycling Institute supports the proposed changes to the Reasonable Financial Return (RFR) described during the Workshop on Processing Payment Emergency Rulemaking. Based on our analyses that I will detail below, we believe this a good solution to the current problem.
Download PDF [PDF, 236KB]

Declining scrap prices coupled with problematic compensation formulas have produced processing payment shortfalls that have already forced the closure of more than 400 redemption centers in California, posing a serious threat to the state’s beverage container recycling infrastructure and sharply constricting consumers’ ability to recover the CRV (container refund value) to which they are entitled.
Download PDF [PDF, 602KB]

Though it would require a statutory change, CRI recommends that the processing payment calculation method be reevaluated to protect the solvency of the recycling centers upon which the California beverage container recycling infrastructure depends.
Download PDF [PDF, 310KB]

CRI’s analysis suggests that there may be nearly 3.7 billion units (3,690,008,614 units) for which no deposit has been paid. These “free-­‐riders” in the system are worth more than $206 million in potentially uncollected CRV.Get Download Link

The Container Recycling Institute has comments and questions for the Department to help clarify understanding of the Fund’s finances.
Download PDF [PDF, 138KB]

CRI's 8/1/13 letter on the method used for the evaluation of recyclables and residuals at Mixed Waste Processing Facilities (MWPF) seeking certification as well as source-separated facilities.
Download PDF [PDF, 532KB]